Life and Death in the App Store
-By Casey Newton, The Verge

John Gruber of Daring Fireball is just killing it with his coverage of the FBI’s case with Apple. He is not doing any first hand reporting (though he does add insightful commentary), but what he is doing is culling all sources for the very best reporting on the subject. So rather than just call out each of his posts individually, I’ll create a list here:

There is nothing new in the realization that the Constitution sometimes insulates the criminality of a few in order to protect the privacy of us all.
-Justice Antonin Scalia
-via Daring Fireball

Seems so strange that pretty much everyone seems to be having so much difficulty explaining the larger screen on the iPhone 5. Most people think Apple it just caving to competition or admitting they were wrong and the 3.5″ was too small all along.

John Gruber, the one guy I assumed would figure this out is just as befuddled as everyone else:

So the question is, if a 4-inch 16:9 display is better than a 3.5-inch 3:2 display, why hasn’t the iPhone been using 4-inch 16:9 displays from the start? Cost must have been a factor. Bigger screens are more expensive, and the 2007 iPhone display was like nothing else on the market. Bigger displays also consume more power. But I think it’s really mostly about a subtle change in priorities, a reordering of the tradeoffs — and, let’s face it, a response to marketing pressure from the aforementioned bigger-seems-better retail showroom factor.

While I’m at it, here are some other things I can help to clear up for John:

Along the lines of can’t-really-be-answered-but-gosh-they’re-fun-to-ponder questions like, say, “Who’d win in a fight, Batman or Spider-Man?” or “Star Destroyer vs. U.S.S. Enterprise?”

Batman has far superior tactics and strategies so he would be the favorite in a fight with Spider-Man. Unless Batman knew he was going to – or could potentially – fight Spider-Man. In this case, Spidey wouldn’t have a chance. Batman is the guy who, with a bit of planning, beat up Superman. You really think a spider is going to get him?

The bridge of the Enterprise
“Lt. Worf, full spread of photon torpedoes please…”
“And while you’re at it, beam the bridge crew of the Star Destroyer into space….”
“And in their place, beam some more photon torpedoes onto that now empty bridge.”
“And if by some slim chance, if they give us any trouble, jump to warp nine and we’ll come back to finish them off later.”

One consequence of the Apple Samsung trial is that no one accuses Apple of just using slick marketing gimmicks to sell products anymore. A product eight years in the making has little to do with marketing and everything to do with product development.

…It would look just like the Samsung Galaxy S.

Looking at just the hardware, and just from the front, the F700 really does look like both the iPhone and the Galaxy S.

What’s important here is that the F700 and the iPhone were released essentially at the same time (within a few months), so it’s hard to call the F700 a copy of the iPhone. Unless Samsung had some secret detailed prior knowledge of what the iPhone was going to look like. But there is no indication of that. 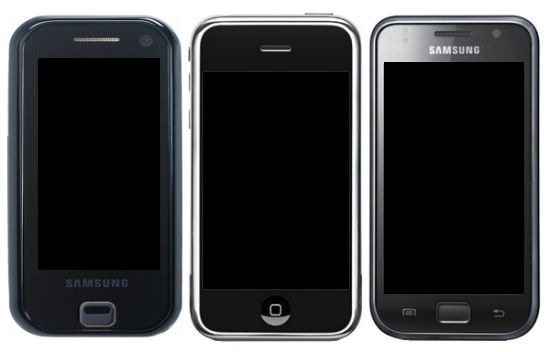 From the front (and with the phone off), all three of these devices have the same slate like appearance that we have all become so familiar with. This is not what phones looked like in 2006. Samsung clearly has some design intent here that shows up later in the Galaxy S and their tablets. Still, the rest of the Galaxy S bares more than a passing resemblance to the iPhone. And once you look at the UI, it’s little more than a direct clone.

The iPod Touch is more a tablet than an MP3 player. Calling it an iPod is no longer relevant. Rebranding it as a an iPad Mini would draw more attention to its real power and clarify the mobile line up.

If the rumors are true that the next iPhone will have larger 4” screen, the newly rebranded iPad Mini could share that same display.

There is also the suggestion that a new 7” iPad could be made from the same screen technology as the 3GS but scaled up to 1024 X 768. This makes sense from for the size of the device, but not for the density of the screen. Would Apple really want to launch a new product with a display that is rapidly becoming obsolete? Doesn’t strike me as being a very elegant solution.

My bet is on a new rebranded 4” iPod Touch with Retina Display (or close to Retina Display) everymore to be known as the iPad Mini.